by Legacy Of Emptiness 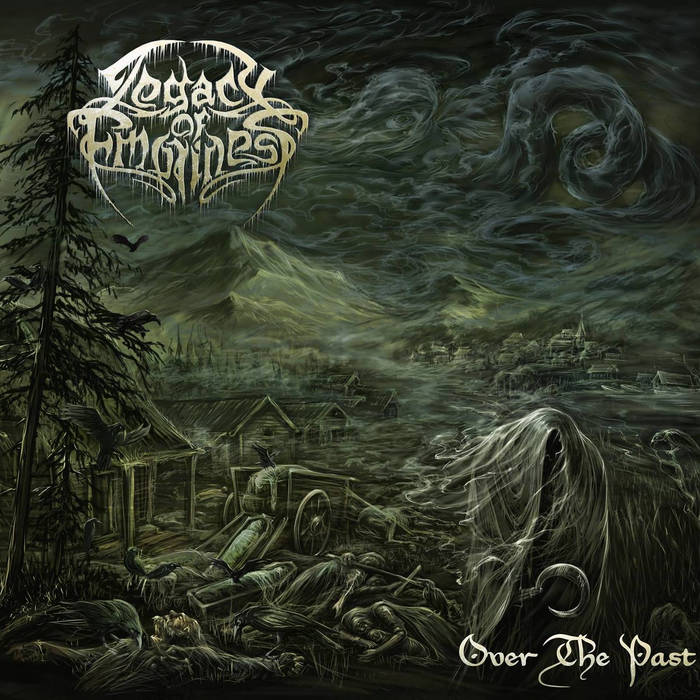 Obstacle of Affliction Excellent song writing is evident throughout this album, dynamic and diverse. Hope to hear more in the future. Favorite track: Drawn By Nightmares.

Arrogant Bastard Mmm, symphonic black metal mixed and mastered by Dan "the man" Swanö! Where do I sign and what the shit took me so long to find this?
Over The Past has a fairly heavy reliance on symphonics – to no detriment – enhancing the blackened atmosphere and lending some originality.
A superb find and a band I'm excited to hear more from! Favorite track: Reminisce.

音黑 Great album. Better to listen to it than read these words Favorite track: Into The Eternal Pits Of Nothingness.

Bugg-Shash, the Filler of Space

Over the past was written and recorded at Where There's No Tomorrow Studios in the winters of 2013/14 and 2017. Produced and engineered by Eddie Risdal and Kjell-Ivar Aarli.
All arrangements by Eddie Risdal and Kjell-Ivar Aarli.
Additional vocals on Drawn by Nightmares was recorded at Distant Flickering Studios, Tampa Fl. by Jesse M. Jolly ,winter 2014.
Mixed and mastered by Dan Swanö at Unisound Studios, winter/spring 2017.

Legacy Of Emptiness
This band was originally started by us
two, Eddie Risdal and Kjell-Ivar Aarli,
as
a tongue in cheek BM-project called
Permafrost back in 1995. Both skills
and ambitions were very limited at the
time. Only
a couple of demos for our
own amusement were made. A few years later, Øyvind joined on
keyboards and we realized that we
actually had something to bring to the
table. We recorded
a couple of demos
with this lineup and left the project to
bleed out in the early 00's.
In 2010, we came together and
decided that the songs we left years
ago were too good to be left behind, so
we decided to record them properly
for, once again, our own amusement.
One thing led to another, and we
found ourselves being more creative
than ever before. The result was our
self-titled debut album containing
5
old tracks and one brand new. All
splendidly mixed and mastered by
Dan Swanö, one of our biggest
inspirations back in the day when we
first started out. The album was
released in 2011.
Over the Past.
As the title will hint, we are now
writing a new chapter. This album has
been a journey to hell and back for us
all. Accidents, cancer and other
illnesses have been thrown our way
from the day we started writing and
recording this beast. Never has an
album title been more fitting: Over the
Past!
There is no real lyrical concept on this
album other than the usual suspects
like darkness, hopelessnes, void and
the odd historical moments.
Musically, it's the opposite of what we
did on our debut. This time, all songs
are brand new except for one that we
brought along from the 90's, heavily
reworked.
The cover artwork is based on the
song 'Four Hundred Years', which is
about the 'night of the four hundred
years' that is a description of the years
Norway were ruled by foreign kings.
The artist, Alex Tartsus, really caught
the nerve in the lyrics and created this
masterpiece.

Over the Past’, a journey to the unknown, to the dark and gloomy views of the past made through epical songs that invite you to trip and have bad dreams… MetalAddicts.com

Balance is the key to this being as well-crafted as it is. It strikes a near-perfect contrast between the intensity of Black Metal, the despondent and teary elements of Doom, and just the right amount of symphony. Don’t let this album pass you by this year as it is excellent from start to finish. 9/10 Metal Temple

Additional vocals on Drawn by
Nightmares were recorded at Distant
Flickering Studios, Tampa Fl., by
Jesse M. Jolly, winter of 2014.
Mixed and mastered by Dan Swanö at
Unisound Studios, winter/spring of
2017.

This band was originally started by Eddie and Kjell-Ivar as a tongue in cheek BM- project called Permafrost back in 1995
All arrangements by Eddie Risdal and Kjell-Ivar Aarli.
Additional vocals on Drawn by Nightmares was recorded at Distant Flickering Studios, Tampa Fl. by Jesse M. Jolly ,winter 2014.
Mixed and mastered by Dan Swanö at Unisound Studios, winter/spring 2017. ... more

Bandcamp Daily  your guide to the world of Bandcamp